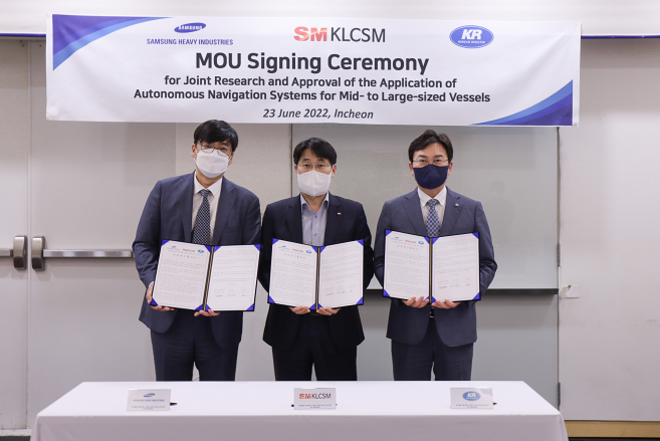 Korean Register (KR), Samsung Heavy Industries (SHI) and KLCSM are joining forces to speed up the development of autonomous ships.

Autonomous ships are the next generation of high-value ships that are operated by intellectualized and autonomous system when working with artificial intelligence (AI), Internet of Things (IoT), big data, and sensors to replace human decision making. In order to operate these vessels, autonomous navigation system needs to be equipped on the ship.

The three companies have signed an MOU agreement to jointly research and approve the application of autonomous navigation systems for mid- to large-sized vessels. According to this MOU, Samsung Autonomous Ship (SAS), SHI’s pioneering system for autonomous navigation, will be applied to KLCSM’s fleet of operating ships to perform risk assessments, develop and certify cyber-security systems, and review the conformity of various agreements and standards for future approval of ship registries.

In addition, the organizations will conduct a comprehensive collaboration for the commercialization of autonomous navigation systems through the Marine Equipment Directive (MED) certification of SHI’s Electronic Chart Display and Information System (ECDIS) modules.

“I am quite confident that our strong collaboration will accelerate the commercialization of autonomous ship equipment and technology, and enhance the quality and competitiveness of the equipment by establishing an actual ship-based autonomous operating system,” said YEON Kyujin, Head of Plan Approval Center at KR.

“With this latest joint cooperation, more autonomous navigation systems will be successfully applied to ships, which will further increase the efficiency of ship management,” said KWON O-gil, Director of Corporation Managing Department at KLCSM and added “We also expect to improve vessel safety and improve the environment of ship operations amid a current shortage of sailors.”

KIM Hyunjoe, Vice President of Ship & Offshore Performance Research Center of SHI, said:“SHI is focusing its capabilities on the research and development for the commercialization of autonomous navigation technologies for ocean and coastal navigation, including conducting practical ship operations based on the sea demonstration of our own SAS autonomous navigation system.”

In addition to this MOU, KR has been building up its related classification certification performance and autonomous navigation ship technology by applying its rules, cyber-security certification and risk-based approval in accordance with its ‘Guidance for Autonomous Ships’ which was published in 2019.