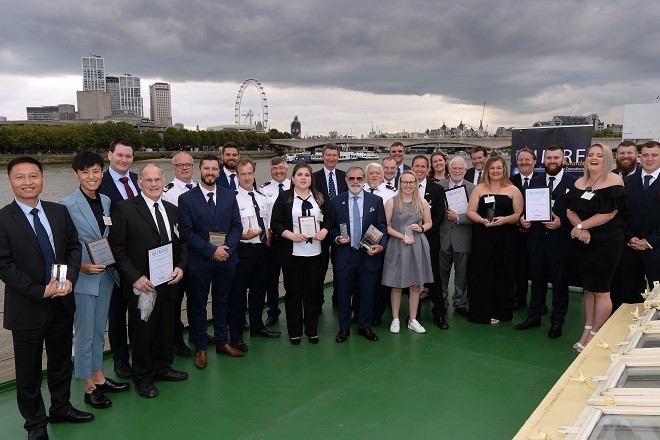 The IMRF Awards 2019 winners have been announced

The daughter of Vladimir Maksimov, presenting the IMRF Award for lifetime achievement in her father’s memory, described his life being dedicated to the service of others, a dedication shared by maritime SAR professionals around the world who together create a legacy that defines what it is to be human.

Theresa Crossley, International Maritime Rescue Federation (IMRF) CEO added: “Natalie Maksimov’s heartfelt tribute to her father and this years’ IMRF Award winners acknowledges the dedication shown by SAR professionals worldwide.  I would like to congratulate all of the winners and finalists in this year’s awards.  They are an inspiration to us all and demonstrate the incredible skill and expertise of so many SAR professionals around the world, who every day show extraordinary skill and courage in their actions to save lives at sea in all kinds of conditions and weather.”

All the search and rescue (SAR) winners and finalists were presented with their awards by Vice-Admiral Sir Tim Laurence KCVO CB ADC at a presentation ceremony held on HQS Wellington, on the second day of London International Shipping Week (Tuesday 10 September).

The winners are as follows:

A special recognition award was presented to David Jardine-Smith for his contribution to the development of international SAR.  He is the IMRF’s expert on mass rescue operations and has been the organisations special representative at the IMO. David joined the IMRF in 2010, following a career at sea and many years ashore working with the UK Coastguard, ultimately as the national organisation’s head of search and rescue.

The IMRF Awards 2019 winner's stories are below in more detail:

Captain Zhibin Huang is nominated for demonstrating exceptional skill and courage, during the rescue of crew from the cargo ship LINFUNE 16 during a Super Typhoon.  The vessel had suffered engine failure, complete loss of power and was stranded near Haimen Bay with nine crew members, who had been trapped on board for more than 24 hours.

On receiving the details, Captain Huang alerted the crew of rescue helicopter B-7310 and flew 140 nautical miles, to the centre of the Super Typhoon, racing against time.

The helicopter reached the site to find the vessel had been pushed onto the shore by wind and waves and was perilously close to a row of high-voltage cables standing downwind. Captain Huang made a bold decision. Arriving over the ship, to save time he decided to land on the tilting, slippery, unstable deck.  Despite the force 12 winds, he managed to land and all nine crew members were able to board the helicopter and were taken to safety.

In April this year, Marine Rescue Port Macquarie received a mayday alert that a 10m motor cruiser with three people on board had run into something hard at sea. The impact was so severe that two people on board had suspected back injuries and the third had a broken jaw.

Two vessels were initially deployed to begin the search. It took some time to find the boat, as the crew member with the broken jaw – the only one able to communicate - could hardly speak.  When they finally found the badly damaged motor cruiser, it was sinking.

Two rescue crew boarded the sinking motor cruiser and gave first aid, while the other rescue boats brought a water pump and two paramedics. The two casualties with back injuries could not be moved and a decision was taken to tow the vessel slowly home.  But as the tow began, the vessel started sinking faster.

After a rescue operation lasting more than six hours, during which the Marine Rescue team demonstrated great skill and courage, they finally managed to get the casualties to safety.

The Innovation and Technology Award in the Field of Maritime SAR:
Use of remotely controlled assets in Maritime SAR - UK Maritime & Coastguard Agency, Phillip Hanson

The UK has many areas of difficult coastline and a range of tidal reaches, but drones and emerging technologies offer new ways of finding people missing in remote and rural areas.
Current technologies rely heavily on trained operators and regulatory restrictions prevent the use of drones beyond a visual line of sight and above 400m.  These factors have limited their usefulness in the maritime SAR environment.  However, the UK Maritime and Coastguard Agency developed four pathfinder projects to explore the use of remotely operated vehicles in SAR operations.

Phillip Hanson has led this multi-faceted approach, conducting extensive trials, with industry involvement, to expose weaknesses in both the platforms and their operations, which has led to more innovative solutions using emerging technologies.

Trials with the Coastguard/RNLI and industry used a range of drones (both rotary and fixed wing) and sensor types in realistic SAR scenarios. The search data was then shared with Qinetiq and the Coastguard to direct operations on the ground.

A 12-month trial used a range of drone types and multi-agency support, including ground teams, lifeboats and aircraft, which extended the understanding of drone capability and limitations. This, in turn, has helped in the development of operational protocols and the application of innovative technologies.

A further trial explored the detection of GPS-enabled mobile phones from SAR aircraft, working with RNLI and mountain rescue teams, to search and locate missing persons. Maritime surveillance capabilities have also been developed for SAR and counter pollution services to help protect the wider marine environment.

This work has significantly advanced the understanding and establishment of concepts and pathways for the use of remote assets to improve the probability of detection and, ultimately, save more lives.

Over the last 35 years, Arthur Allen has been advising the US Coast Guard on the impact of ocean currents and winds on the location of people, vessels or aircraft in distress.  His work, particularly on maritime drift modelling, has led to improved planning of search operations, reduced rescue times, reduced the risk to responders and has helped save thousands of lives.

His greatest achievement was the implementation and integration of the broad spectrum of environmental research and expertise into search planning and survival modelling.
He has also developed a forecasting tool to predict the impact of the forecast sea and wind conditions on the ability of sailing vessels to adhere to a planned course. He is now applying similar principles to help search planners forecast the movement of active swimmers.

His work on the development and fielding of Self-Locating Data Marker Buoys (SLDMBs) has given search and rescue authorities the ability to compare on-scene current data with forecasted ocean currents, providing even more accurate drift data to search planners and improving ocean current models.  His work is detailed in the IAMSAR Manual, the US Coast Guard SAR Addendum, and within the US Coast Guard's Search and Rescue Optimal Planning System (SAROPS) which used for training in countries around the world.

Isobel joined the RNLI Shoreham crew aged just 17 years old, while studying for her A level exams. With the support of the school, she was given a parking space and approval to leave lessons and join the crew whenever her pager went off alerting her to an emergency at sea.

She is a brave, inspirational, determined young lady whose life ambition was to save lives at sea – while successfully achieving three A* grades in her A level exams.

Isobel is one of the lifeboat crew on the D-class rigid inflatable lifeboat and the Tamar-class all-weather lifeboat. Her first lifeboat call was on the inshore lifeboat to rescue a man, who was in the water following a suicide attempt. The lifeboat crew found him and took him ashore to safety. Since then she has attended many calls at all times of the day and night – broken down boats, people in distress in the water, searches for casualties and attempted suicides.

She also takes part in training exercises every Wednesday and Sunday and cleans the boats and boathouse every Thursday night, no matter what the weather. Isobel is an ambassador for the station during lifeboat station events, such as the annual open days, and promotes not only safety around our shores, but also women in Search and Rescue.

Isobel says: “Being part of the crew is like being part of a second family. I am one of three women crew members at Shoreham but we all feel like one team. I would encourage any woman who is interested, to join the family and have a go.”

In May this year, a man, woman and child were in a small boat at the entrance to the Waikato River, when, at about 17h30, the boat stalled and flipped, tossing them into the freezing water. They managed to call the police and a large multi-agency search and rescue operation began, co-ordinated by the Coastguard Northern Operations Centre.

Three Coastguard rescue vessels were dispatched from Waiuku and Papakura, together with shore-based search teams from the police, the Auckland rescue helicopter, a police helicopter with thermal imaging equipment and a Surf Life Saving inflatable rescue boat (IRB).

There was almost no wind. The sea was flat, but waves breaking on the bar at the entrance to the river were huge, creating a lot of sea spray and hampering visibility for the rescuers. It was a very dark night, with no moon and the sand on the nearby beach was black.

The Police Eagle helicopter located the three people in the water – barely alive - with infrared heat-detection equipment.  The Auckland Rescue Helicopter positioned overhead for a winch operation, but lack of visual reference and sea spray meant the operation was abandoned.   It was not safe for rescue boats to cross the bar, so the IRB searched using the rescue helicopter’s landing light, while Police vehicles parked on the beach and used their headlights to help visibility in 1.5 to 2m breaking waves.

In just four minutes the patients were found, taken onboard and returned to shore. The rescue helicopter landed to medivac the patients. The woman and child were critically hypothermic, with the woman suffering cardiac arrest several times on the way to hospital. The man was cold but not critical, taken to hospital for monitoring.

The rescue involved intense teamwork across all organisations involved and thanks to their skill and dedication, all three casualties were safely and made a full recovery.

The International Maritime Rescue Federation (IMRF) brings the world's maritime search and rescue organisations together in one global and growing family, to share knowledge and improve maritime SAR coordination and response so more people in distress on the sea can be saved.

IMRF's member organisations share their lifesaving ideas, technologies and experiences and freely cooperate with one another to achieve their common humanitarian aim: "Preventing loss of life in the world's waters".